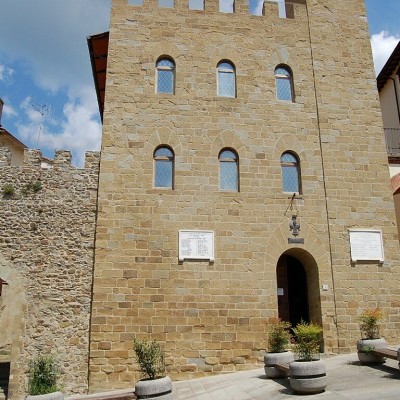 Small town of medieval origin, Castiglion Fibocchi rises on the slopes of a typical sweet Tuscan hill, along the ancient Roman consular road Cassia Vetus, a few kilometers from Arezzo, the “city of gold”. The country is located at the point of ‘meeting between the Casentino Valley and the upper Valdarno, with a population that has developed uses, character and culture all of its own.

The town of Castiglion Fibocchi carefully preserves the traces of a noble past, where you can admire the castle walls, the Cool Door of the twelfth century and the ancient village Gello Biscardo, beautifully preserved.

Among the members of the Pazzi family stands the figure of Octaviano Pazzi, nicknamed Bocco due to deformation of the face and so the country is named after him.

Name with which is called the most important event that fills with joy all over the country, the “Carnival of the Sons of Bocco”. An event not to be missed, where you can admire the extraordinary and beautiful masks Baroque.

During the sovereignty of the Guidi it was built a castle to gain control of the road that linked the Valdarno to Casentino.La structure of our B & B is located within the walls of the ancient castle of Castiglion Fibocchi, one of the witnesses is  an inscription prominently on the outside of the walls.

“The Castle” and the main building of a great historic complex , with origins from Roman times. The real beauty of this structure has been brought to light after years of careful renovations that have transformed our location in a very elegant and  welcoming accomodation.